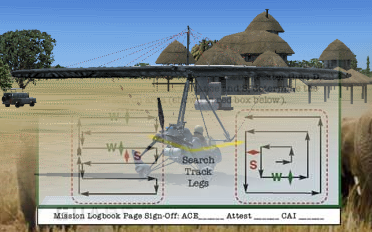 
The "Global Adventures" series has seen a shift in design organization for me. Whereas before (with some of the design for AIR or earlier ACE missions) design was done more by fiat, design here has been substantially more collaborative and iterative. My biggest transition has been one of moving towards a cloud-based design tool for each of these missions. Since I am ostensibly working in the "real world" (FSX uses a simulation of the globe), my in-game locations are all approximately the same as their meatspace counterparts. To that end, Google Earth/Maps has proven itself an invaluable tool. This isn't the first time I've used Google Earth for design. I used it often in AIR (in fact, it was tied in as a part of the curriculum there through the tabletop touchscreens) but this is the first time it's been a procedural element of my design (before, it was largely at-will). There are two notable benefits I see from using this tool:
1)  There's zero overhead in terms of sharing these designs.


While Google Earth is a standalone application, its map files are exportable to Google Maps, which is entirely web-based. I can
e-mail these maps directly to coworkers (or clients) regardless of their PC configurations.


2)  I can speed up the transition from design to implementation.


Because I am constrained to what is essentially a coplanar map
design (points of interest can vary by elevation, but no designs
call for points stacked vertically), my 2D design acts as an
orthographic view of my final in-game design. It is because of
this fact that I made a tool that converts the exported Google
Earth files into an FSX-readable mission file. I've been able to
cut down on a lot of the initial blocking-out of a level by using
this tool to generate a basic object at each point of interest.
This gives me 100% colocation of points between the design
and the level without having to manually enter so much as a
second of latitude or longitude.

As mentioned above, I've also had the opportunity to make some tools for this set of missions. The tool mentioned above is a tool that is, for right now, just for me (although the possibility exists to expand it in the future for use in-classrooms as a basic mission editor). I've also made another tool that is designed for the end-user. One of our missions for this series is a multiplayer mission that has this set-up - the players are given a set of targets to reconnoiter, they are given the locations of these targets (latitude/longitude), and they are given a set of tools (airplanes) to do this with. The players must decide which airplanes are required for which targets (e.g. "is this target so small that we can only land there with airplane X?") and then balance everything out amongst the players so that the targets are reached in the shortest possible time. Because the goal in this mission is testing efficiency of the plan and not testing the ability to navigate (dead-reckoning style), the mission was designed to allow the players to use a GPS. When this feature was requested, FSX being able to set up a GPS flight plan was a known quantity. Being able to set up that same plan in the context of a scripted mission was not.

As it turned out, FSX did support flight-plans in-mission, but the flight-plan had to
be premade. To allow the players to create a flight plan that would automatically integrate into the mission (without also jumping through a lot of hoops), I made
a tool to allow the players to input coordinates manually (from the information
given pre-mission) and then have a flightplan generated for them the next time
they play the mission. It's worth mentioning too that this tool is another one ripe for future development.
The tool that was distributed with the mission is a constrained one compared
to the full functionality of the tool as a flight plan creator. I know that in the
future, I could likely integrate Google Maps directly into the tool's GUI to allow
for a point-and-click placement of GPS waypoints.