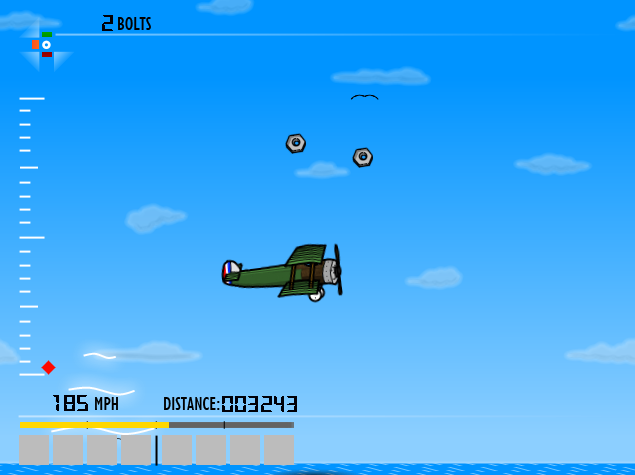 Click the above button to play Island Escape (but please remember - it's just a prototype, not a complete game!). There are no instructions included in the game (as it is a prototype). In the level, up and down (on the keypad) control your pitch while the space bar controls your engine. Press enter at the end of the level to move forward.

Island Escape was one of the first attempts we made at having something that taught the basic concepts of flight without use of strict simulation software. One of the references an educational collaborator pointed us to was a small Flash module on a Smithsonian Institute site, which emphasized the changes in parts of an airplane as having various effects on the forces of flight at play.

We took that ball and ran with it, marrying that concept (pick and choose airplane parts) with what is essentially a cannon game (i.e. fire a cannon and see how far it goes, based on what it interacts with). The biggest challenge for me was turning what would have been easy (a ballistic flight model) into something that had some teachable components (i.e. a lifting body with four forces acting on it).

The 2D flight model I developed was robust enough to demonstrate all these forces, but ultimately, if this game were to be developed further, I would need to do a much better job of balancing each individual piece to make sure that the flow of the game is preserved as you approach the outer fringes of performance (both high and low).