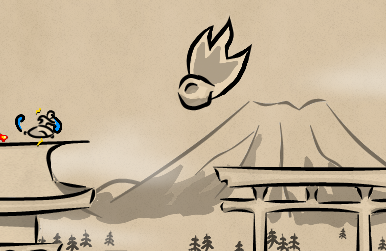 Pyroclastic Flow What I've worked on:

Click the above button to play Pyroclastic Flow (for a little context). Pyroclastic Flow is the first game I've developed independent of either my work or of some other game. As such, it's not necessarily representative of
the kind of game I'd make if I really wanted to sink my teeth into the process, but history says that going full-bore on first attempts is rarely beneficial.

The goal for this game, then, was just to get me acquainted with some of the systems I'd need to manage to develop independent games; primarily
those systems aligned with publication and distribution. I'm still learning some of those! I used Multimedia Fusion 2 to develop this. This is a tool in the vein of other simple game development tools (things like Game Maker) and less aligned with "real" engines. Because of this, everything is kept pretty simple and straightforward (and 2D).

I knew that, because of prior experience prototyping with this engine, the easiest thing for me to try out would be something sidescrolling and procedural. The obvious choice is an infinite runner, right? I thought so.

I took heavy cues from Canabalt when making this game, since it's the ur-example of 2D infinite runners. Where I diverged from that schema was in the following places:


If there's a "jump" button, I'd like the player to be pressing it a lot. I'd also like to encourage more navigation vis-a-vis environment properties. So maybe you make a short jump here or maybe you use the rope line to "bounce" entirely over the next object. Or maybe you go on top of that object, or maybe you go through it.

2) Give the player more tools to play with


As with the previous entry, I wanted to emphasize the player's feeling of control over his movement. In this case, I made some at-will abilities, things that are intrinsically part of the player versus part of the environment. These abilities were keyed on a "mastery" system, where sustained use (or sustained equipping) of these powers granted indefinite access to them (otherwise, the powers were only available on equip). I presented two tiers of these abilities, with the second tier accessible only after complete mastery of the first, to encourage experimentation with all types of base-level abilities.
Although I've published this project already as a Flash game, the game was designed for both Flash and mobile devices, and so I'd still like to come back to this and move it on to mobile platforms - after all, this is a vehicle for learning distribution channels, and mobile channels are certainly a valuable one to be acquainted with!